As the finish line gets closer and closer, the games keep churning here in the desert.  The Padres will play two today, a game in Peoria against the Reds and a game in Mesa against the Cubs.  I will be attending neither as it turns out, a rare but appreciated day off.  We will broadcast today's game from Peoria, starting at 1pm on XX1090, Ted Leitner, Jerry Coleman and Bob Scanlan will have the call.  I'll return for tomorrow's game with Bob against the Diamondbacks from Peoria.

Richard will make his 3rd start of the spring in an "A" game, he did make a start in a minor league game last Monday on the off day.  That start drew rave reviews from pitching coach Darren Balsley saying it was perhaps the best he'd ever seen Clayton throw.

Bass will make his 5th start as he vies for a spot in the Padres bullpen.  He's 1-0 with a 2.00 ERA previous to his start at Mesa today.


- As you noticed above, Nick Hundley is back in the lineup.  A right side injury has kept him out since March 14.

- Status quo on Kyle Blanks and Orlando Hudson.  Both are progressing and are still day to day, with no timetable set for a return to playing.

- A new injury today, with Jeff Suppan coming down with a strained right triceps suffered in his last start.

- Buddy Black continues to sing the praises of the two guys battling for the back up infield spot, Everth Cabrera and Andy Parrino.  Parrino made a spectacular catch in last night's game at 2nd base.   Both guys have been competing, and playing hard in Black's estimation.


Amber Harding of the UT, did a little video feature, behind the scenes in the broadcast booth the other day.  The video is now up on the UT's web site.  Click here


So earlier this spring, Corey Brock and I were out shopping for some beer at a local spot, when I stumbled across a beer bottle that bore a striking resemblance to a certain former Padres pitcher... 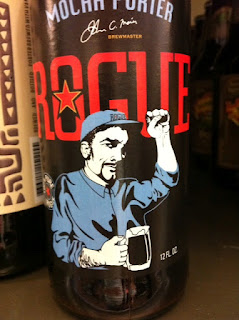 You know who right?  Of course, Mike Adams!  So last night, I randomly bumped into the now Rangers pitcher and had to show him this picture.  He was doubled over laughing hysterically denying of course that he lent his mug for this mug of beer.  I believe him!  Good stuff.