Greetings from Peoria again, as we are getting ready for a Cactus League game featuring division rivals, with the Padres hosting the Diamondbacks.   Arizona was the surprise of the division a year ago, winning 94 games to take the crown by 8 games over the Giants.  Kirk Gibson won manager of the year honors in the National League.   The Padres were 7-11 against the Diamondbacks last season, winning 5 of the 9 games at Petco, but dropping 7 of the 9 at Chase Field.

Yes, this is the first time the Padres pitchers are in the batting order.  Buddy Black hinted that Stauffer who is slated to go 3 innings, may not bat depending on the situation.  If a bunt is in order you'll probably see Stauffer, if not likely a pinch hitter to simulate the scenario for the regular season.

Chase Headley as you see is in the lineup for the first time.  His back issue is "behind him" if you'll pardon the pun.  Buddy doesn't see this as a long term issue for Chase, just one of those things.

Black had a funny moment with us during our media session today.  He was asked about the young guys that have been playing late in games.  Guys like Rymer Liriano, Jonathan Galvez (who Black may start calling Johnny G), Edinson Rincon and Jaff Decker to name a few.  He called them the "B-Bombers".  After looking at their impressive batting averages Buddy deadpanned "These guys aren't playing enough".  Good stuff from a great guy to cover.

One other note, the Padres will break out the new home whites for the game today... 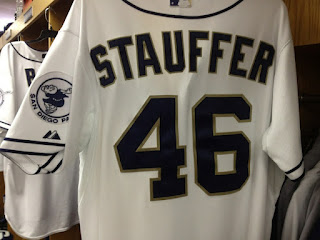 I like the look, the piping adds a nice classic touch and you gotta love the swinging friar on the arm patch. So picture these uni's in your head as you join Jerry Coleman, Bob Scanlan and me for the call of the Padres and Diamondbacks today.  1pm on XX 1090.