Arlington Park is in its final year of racing. It’s owner is looking to sell the 326-acre park and there should be at least one, if not two, Chicago sports owners looking to buy and do it now. Thankfully one of them just told us that they are in the bidding for the land. The Chicago Bears. This is the franchise that SHOULD be looking at this as a viable place to move the franchise. 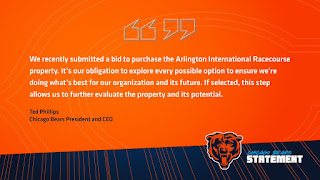 The Bears spent a total of 660-million dollars on it and basically wasted all of it. Moving out would have been the best thing for everyone. The Park District still runs things and the playing surface is an absolute joke. Late November and December, it’s green paint on dirt. Looks terrible and plays even worse. A move to the suburbs would take the Park District out of the equation and field turf could be installed. Easier upkeep, safer than dirt.

When the team moved into the “Spaceship to be named later” they ensured that there will never be a Superbowl at Soldier Field or in Chicago. Since the NFL started using cold weather cities, the Bears home stadium would have been a great showcase for Chicago and the league. Not going to happen now. Under the NFL rules to host the big game, a stadium must have at least 70,000 seats to host a Superbowl. The Bears actually LOST 5,000 seats in the renovation and have just a 61,500 capacity. Money out the window. A big lack of vision.

This next statement might seem blasphemous, but  hear me out. The Bears would have been best served to build a state-of-the-art retractable roof stadium. That would have helped the city attract the NCAA, for a regional final or the Final Four. I know, “Bear weather, woof woof”, it’s RETRACTABLE, meaning you can keep it OPEN during football games. Dual purpose, to keep all parties happy.  Just because it opens, doesn’t mean it has to, am I right? Get the big events here, keep the big events here. Money, money, money!

I know, they are the CHICAGO Bears, not the Arlington Heights Bears. Ok, well then they’re the East Rutherford, NJ Jets/Giants, The Santa Clara 49’ers and the Miami Gardens Dolphins. Seriously? We’re going to quibble over a name? They need to move, stop with the silliness.

My feelings about keeping the team in the city were much more passionate until I saw what was done to Soldier Field. For the money they spent, a brand-new building could have gone up in Rosemont, or Arlington Heights, or on the south side. In 2021, they’d be renovating it to keep up with the times and probably spending a lot less for the upkeep. Silly mistake. Build it big, make it opulent, make a statement and they will come to Arlington Heights. Oh, and out of towners will still make their way to the city and spend some dollars, so don’t worry about that. Think about the tailgating lots that could dot the landscape of the huge plot of land. You’d still have all the comforts of the old place, in a better, more fan friendly environment.

Here’s another good reason to move. Getting in and out of Soldier Field, both as a fan and a driver is ridiculously insane. Egress that funnels you into Lake Shore Drive with no place to go. Sometimes the ride to and from adds up to the time spent watching the game. Now, I realize Arlington Heights isn’t perfect, but with some major highways and roads leading into the complex, it has to be better.

Now there is the giant elephant in the room that has to be addressed. Who’s paying for it? Well since I don’t have the details on that and since the move isn’t official yet, let’s see how it plays out. Taxpayers are likely to be footing some of the bill, it would be really nice if the McCaskey Family realized the mistake it made in 2003 and pours most of, if not all the money in. We know that isn’t going to be happening, but at least this is a start, right?

What to do with Soldier Field? The Chicago Fire recently moved back to the facility and there are a number of events held there during non-football time. I’d love to see the White Sox move there. It would be a gutting of what is there now and if the lords of baseball allow it (MLB), have the skyline pop out of the outfield and make it one of the best views in the sport. The Cubs aren’t going anywhere, so it’s a perfect opportunity for the White Sox to still be true to their south side roots and erect a state-of-the-art park of their own. Just a thought.

We can sort out what will occupy that land on the lakefront later, but right now my message to the Bears: Pack up and don’t look back. It’s time for the franchise to reach new heights in Arlington Heights.

No Sunscreen, No Rosin, No Grip

Leave it to baseball to get itself in a sticky situation, just as interest in the sport is on an upswing. Puns intended. MLB notified teams this week about how it will be enforcing and cracking down on pitchers using foreign substances on the baseball. Starting Monday pitchers will be subject to random checks and could face ejections, fines and suspensions if found with a substance on the ball or their glove.

Teams were notified in Spring Training, but MLB didn’t seem to be in a rush to actually reprimand anyone. Until now. Nearly 3 months into the season baseball all of the sudden will be suspending pitchers for 10 games (with pay) if they are found to be doctoring the ball. A bit of an overreaction? Yes. Considering, as many players have pointed out, the hypocritical nature of the mandate, by a league that didn’t even suspend one single Houston Astros player for actually cheating the game.

Even worse, now umpires like Joe West, who doesn’t need a further spotlight shone on him, will be the ones looking to enforce the rules. West already overreacted to a Cardinals pitcher entering a game with a hat that looked worn and appeared to have something on it. Cardinals' manager Mike Schildt was ejected for arguing with West. The only thing that resulted was the pitcher had to change hats. This is unfortunately shades of things to come. Umpires have already had an awful year enforcing actual rules of the game. See Marty Foster’s created, made up “interference” call or Angel Hernandez’s strike zone during a game. Ugh.

Rays’ pitcher Tyler Glasnow, who pitched against the White Sox Monday and left with an elbow injury thinks the impending enforcement led to his malady. He told reporters via Zoom, “I switched my fastball grip and my curveball grip. I had to put my fastball deeper into my hand and grip it way harder. Instead of holding my curveball at the tip of my fingers, I had to dig it deeper into my hand.” Glasnow said.

Glasnow also echoed a sentiment shared by many pitchers in baseball. "Do it in the offseason. Give us a chance to adjust to it. But I just threw 80 innings, then you tell me I can't use anything in the middle of the year. I have to change everything I've been doing the entire season. I'm telling you I truly believe that's why I got hurt."

The point being made by MLB is strikeouts are up and it’s because of the pitcher’s spin rates are up. Power numbers are still there, as the White Sox Dallas Keuchel pointed out after last night’s game. Is it possible that as baseball has evolved over the last decade plus, the taboo of the strikeout by a hitter has all but vanished? It’s possible that pitchers have managed to figure out weak spots in a hitter’s game, with all the video and heat maps that are available to them now.

According to a chart in the Baseball Almanac, in 2000 the combined strikeout numbers between the AL and NL was 31,356. In 2019 the number soared to 42,823. There has definitely been more attention paid to “StatCast” numbers from MLB, which focus on launch angle, exit velocity, spin rates and strike out rates more than most other stats. This to me is more of an explanation to the increased numbers, because organizations aren’t looking at strikeouts as a bad thing. That message is being conveyed in the minors and younger players are learning as they go through the system to accept the “K” as a necessary evil.

Don’t misunderstand me, altering a baseball should be illegal. Pitchers caught with substances like sandpaper, spider tack and cutting the ball, deserve the punishment. Those that are using, rosin (there’s a rosin bag on the mound for each pitcher, it’s right there to see for everyone) and sunscreen, to me, aren’t doing anything put ensuring a grip on a baseball. The ball itself has been manipulated by MLB over the years, that more and more pitchers had to use substances. When the league decided using a “superball” a couple of years ago, pitchers would say they couldn’t feel the seams. Pitching is all about feel and touch on the baseball. With the live arms in the game now, routinely hitting 95+ mph, I’m not sure I’d like to face a guy throwing that hard with no control or feel of the baseball.

Baseball looked the other way during the “Steroid Era” because fans loved watching home runs being hit. Pitchers suffered because of the amounts of long balls being hit and as a result, they were looking for the equalizer. Now that the pitchers have a bit of an edge this season, baseball is choosing to overreact and enforce rules in the middle of a season. So, what if players were stealing bases at a record pace, would MLB eliminate leadoffs midseason? Let the players, play the game. Hitters worth their salt, don’t care what a pitcher is using on a baseball, they’re going to hit it eventually. Stop tinkering with the game already MLB, what’s next, home run derby instead of extra innings? Oh wait, they’re already experimenting with that. See what I mean?
Posted by Andy at 10:40 AM No comments: