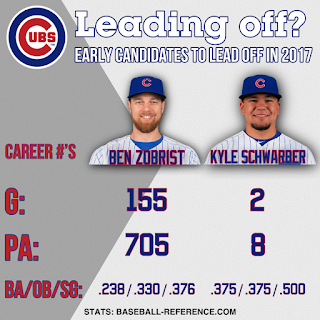 
Seemingly the Cubs have an excellent chance to repeat this season.  Lots of things still have to go right.  Health is always an issue with every MLB team, as they traverse the 162 game schedule in only 6 months time.  Don’t expect too many surprises when it comes to the 25 man roster to open the season.  This team should repeat as Central Division champions for sure, but will face some big competition when it comes to the NLDS and NLCS.  This team though is built to win, with depth and versatility.  Bottom line: Repeat.
Posted by Andy at 2:46 PM No comments:

One of the most interesting games I ever broadcast was an extra inning game between the Padres and the Rockies in San Diego.  It was April 17 2008, which bled into April 18, after 22 innings, 42 players and 6 hours and 16 minutes of baseball. The contest didn't feature a single position player pitching, but did use a total of 15 hurlers, many needing to go multiple innings.  Who won?  Oh it was the Rockies 2-1.

I bring that game up because Major League Baseball is considering a change in rules when it comes to extra innings games.  The proposal which will be tried out in the rookie level Gulf Coast League and Arizona League this year, will place a runner at 2nd base to begin each inning after 9 frames are completed.  This is according to a Yahoo Sports report published online Wednesday. MLB will study the in-game scenarios this year to decide if the rule should be used at higher levels of minor league ball or even at the Big League level.

A variation of this rule has been used in international baseball for almost 10 years and will be used in the World Baseball Classic this spring.

Joe Torre, MLB's Chief Baseball Officer was quoted as saying, "Let's see what it looks like." The former Yankees manager and major leaguer, is a strong proponent of the testing. "It's not fun to watch when you go through your whole pitching staff and wind up bringing in a utility infielder to pitch. As much as it's nice to talk about being at an 18-inning game, it takes time."

"Its baseball. I'm just trying to get back to that, where this is the game that people come to watch. It doesn't mean you're going to score. You're just trying to play baseball."

This line of thinking is wrong on so many levels in my opinion.  Take Torre's first point, about not wanting to see a position player wind up pitching in a game. First of all, it's a rare occasion. I'm sure those in attendance (those who stayed for all 16 innings) at the Cubs/Rockies game July 29, 2014, would beg to differ at how fun it was to watch then Cubs catcher John Baker pitch. Not only did he pitch, he scored the winning run and became the 1st position player to ever win a game in the history of the franchise. Fans enjoyed it. The players enjoyed it. The game played itself out as it has for over a century.

The only people that didn't enjoy the outing by Baker, were then manager Rick Renteria who didn't want to overuse his bullpen and then Colorado manager Walt Weiss who's team couldn't get to the Cubs catcher.  Weiss saying, "I think he was smart enough to know that if he stayed below the hitting speed he was going to be effective and that's what he did."

Again, these are rare happenings in baseball and to over react to change the rules of the game to speed it up like this is insane.

In this day and age of minute attention spans, I'm not surprised that baseball is thinking in this way, but come on, this game has been great for so long, this particular change seems unnecessary.  Why not a home run derby after 9 innings instead?  That way the game will end sooner. Much in the way the NHL has used the shootout (another horrible rule to me, a tie is a point in hockey, leaving without a winner is fine with me) and soccer goes to penalty kicks.

Extra innings is filled with drama, strategy and management of a team's pitching staff and bench.  Don't 'dumb this down' for the hard core fan base.

Not only will this rule change how the games are decided, but how will statistics be affected?  Former Major League pitcher and now MLB Network analyst, Dan Plesac took to Twitter today "...who (pitcher) gets the L or W? Is it a TEAM loss or win?" Very good question. Baseball is a game with statistics for everything.  How will these new extra inning games be scored in respect to not just W's and L's for players, but ERA, FIP, batting average w/RISP and so forth?  I know this is a minor point, but one that does need to be thought about, considering how, stats equal dollar signs for players come contract time.

There is a simple solution. I've said this countless times before, expand the roster.  Not to 40, not even to 30. Seems like 26, 27 or even 28 might do the trick.  Even if you want to do it like the NFL does, where you have a 53 man "roster" but dress only 45 at game time, do a 30 man, and dress 26-28.  If you think that's too many how about a 27 man roster, with 25 eligible each night, but one player can be designated to be activated only in extra innings. I'm spitballing here, but this has got to be better than a drastic change to an already great game.

I understand that things have to change to survive sometimes.  Its just difficult to see the rationale behind this type of move.  I am willing to see how this experiment in the minors turns out. Will it shorten extra innings?  Will it save time?  Will it save pitchers' arms? I guess where there's a will there's a way, but is it the right way to go?