Many look to sports after tragedy...

Let me start by saying, I hate the fact that another senseless, and cowardly act, that resulted in tragedy,  made me think about this topic.  I hate that again, some idiot(s) think so little of life, would take innocent lives and affect hundreds of families for no reason.  But it happened, and this act turned a marathon into a battle zone.  It tore apart families.  Why?  Well that's a bit out of my knowledge zone and nobody at least yet, knows why this act was perpetrated in Boston.

This latest act of terrorism, got me thinking about 9/11, and how the United States bounced back.  I also starting to think about other tough times our country has been through, like the 1979 seizing of the United States Embassy in Iran, and the subsequent taking of American hostages.  You're probably saying, huh?  Well it seems like there is a common bond in how the US healed from those two catastrophic events, sports.  Yes, sports.  The athletic accomplishes of some, meant so much to many and really seemed to help those directly affected a chance to escape, and heal.  It's not a magic elixir. It won't bring back those who were taken from us, it won't help find those responsible, but it is something that unites us.

In the late 70's and early 80's, America was in a dark place.  There was a gas shortage.  Russia had invaded Afghanistan.  Iranian students overtook the US Embassy and took American hostages.   President Jimmy Carter spoke to the American people in July of 1979, even before the events in Iran, and said:

It's clear that the true problems of our Nation are much deeper -- deeper than gasoline lines or energy shortages, deeper even than inflation or recession. And I realize more than ever that as president I need your help. So I decided to reach out and listen to the voices of America.
The threat is nearly invisible in ordinary ways. It is a crisis of confidence. It is a crisis that strikes at the very heart and soul and spirit of our national will. We can see this crisis in the growing doubt about the meaning of our own lives and in the loss of a unity of purpose for our nation.
The erosion of our confidence in the future is threatening to destroy the social and the political fabric of America.

I'm not a political person, so please don't look at this as a political statement.  It was bad, morale was low and there was no end in sight to the crisis.  That was until a rag tag bunch of college kids assembled under the direction of a fiery hockey coach Herb Brooks, began an historic run thru the Winter Olympics in Lake Placid, New York.   "American Pride" returned when they faced and then defeated the Soviet Union team, 4-3 on February 22, 1980.  Again, I'm not saying that this event alone healed our nation but it started the rally.  For 3 hours on that February night, nobody was thinking about inflation, about energy shortages, or gas shortages.  The chants that night of USA! USA! USA! were deafening and once again it seemed as though we were the UNITED States of America.

In the wake of 9/11, both the NFL and Major League Baseball shut down.  I remember covering a Chicago Bears practice the day after the attacks.  Standing out on the practice field talking to players, and being interrupted by the sound of a fighter jet flying over head.  It was a new world.  It was kind of eerie with all commercial airlines grounded a normally busy sky was silent.

I also remember things getting back to "normal".  I remember the electric atmosphere at Wrigley Field when the Cubs got back to playing baseball.  I'll also never forget the signs that I saw that night.  "We Love You New York", "Tonight We Are All New Yorkers" and "Chicago and New York Stand Together".  Powerful.  Considering that in sports these two cities (like San Diego and Los Angeles) are rivals, not friends, nobody in one city roots for the other, but this tragedy brought the country together.  It's kind of like if you have a sibling, it's cool if you want to pick on your brother or sister, but the minute an "outsider" does the same, you take issue and defend.

Such was the case with the latest tragedy caused by the bombs set off at the Boston Marathon.  The pure evil in the hearts of two idiots, took 4 lives and changed hundreds more with this one act.  Boston has always had a reputation of being strong, and wow, did it ever live up to that billing.  Strangers helping strangers, offering shelter, rides, medical assistance and pure compassion.  It tugged at my heart strings as I'm sure it did yours.

The outpouring of support from again, rival cities was great to see.
Even a Phoenix Coyotes Hockey player, Keith Yandle, who hails from Boston, showed his true colors, honoring the memory of the little boy that was killed in the blast... 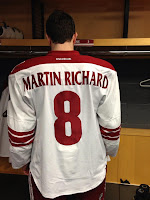 Saturday, the Boston Red Sox got back to work.  They honored the memories of the four people that were killed.  They honored the first responders at the race, the multiple agencies of law enforcement that eventually caught "suspect #2".  The team saluted the governor, the mayor and the police chief.  Heck, even Neil Diamond showed up to lead the crowd in the singing of his hit "Sweet Caroline".  But for all of those that were looking for some healing, some distraction or some sense of normal, Red Sox DH, David Ortiz addressed the crowd, wearing the word "BOSTON" across the chest of his home jersey (normally the home jersey says Red Sox) and uttered a profanity, but man was it on point...

“This is our [expletive] city, and nobody is going to dictate our freedom. Stay strong.” 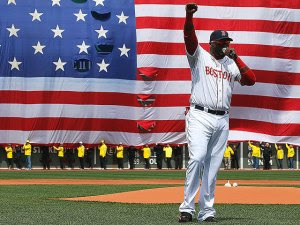 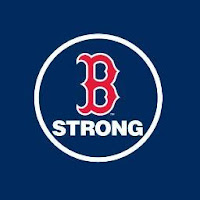 He later apologized for using a profanity, but in the moment, it was what everybody in Fenway Park was thinking, and for that matter what we were all thinking.  Well done Big Papi.

Sports in general get a bad rap at times.  Athletes being payed millions to play kids games.  Scandals involving gambling, drug use and violence.  Ok, I get it and there's no denying that the industry has its faults.  But look at the evidence, sports unites us, it provides us an escape from our everyday problems.  3 hours a day at a ballpark, stadium or sports venue is never a bad way to spend that time.  I feel so fortunate to work in the industry and while sometimes I feel desensitized because its my life, I look to the examples I've provided, and realize how important sports is.   If you don't believe me...

I always turn to the sports pages first, which records people's accomplishments. The front page has nothing but man's failures.Earl WarrenChief Justice of the United States.


Here's to hoping I never have to write something like this again.  I don't want to have to update how a baseball game or football game provided us with an opportunity to heal after another tragedy.  Terrorists are cowards.  Terrorists are weak.  The United States is strong.