The Snow is Flying in Alaska!

When it snows in Alaska, it SNOWS!  Piling up at the rate of an inch an hour, its been non stop since about 8am this morning local time.  How snowy is it?  Well the valet guys at the hotel, weren't parking cars, they were doing something more productive with their time today as you'll see below. 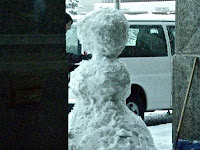 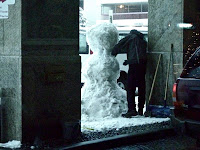 So that's what we woke up to this morning.  Pretty cool.  The snow got so bad that Houston had to cancel it's morning practice.  The High School they were supposed to shoot in, is up in the mountains and it snowed almost a foot on that peak.  The Toreros however are going through their pre-game practice right now.  The High School they are working out in, is about 15 minutes on a dry day from the hotel, today it took nearly 30 minutes.

So USD will face the Houston Cougars tonight, 7:30 local, 8:30 Pacific time, for the right to advance to Saturday's championship game of the Great Alaska Shootout.  Houston scored 100 points in their game in a win over Oklahoma last night.  They are a very athletic team, they don't turn it over, but they also don't play much defense.  They scored 100 but gave up 93 to the Sooners.  I'll have the call again tonight, from the Sullivan Arena, starting at 8:15pm PT, and the tip comes your way at 8:30pm PT, on XX1090, and usdtoreros.com.  I hope you'll tune in!

With having yesterday off, the Toreros had a great team Thanksgiving dinner at a local restaurant in Anchorage.  We all were able to eat a great Turkey dinner with all the trimmings, including a delicious apple sausage stuffing, mashed potatoes and vegetables.  It was a great evening and the players and staff really enjoyed being together on the holiday since we were all away from our families.  Glad the schedule worked out that way and glad we took advantage of the time!

With the Winter meetings only a few weeks away, teams are starting to finalize their plans heading into the gathering in Indianapolis.  No real concrete information is coming out of Padres camp to this point, but they could be a player in trade talks.   Judging from the informal poll on this blog, you are all as up in the air as I am about whether or not Adrian Gonzalez will be dealt or not.  The yes' and no's were pretty even as of the time voting closed.  I'll get a new poll up there shortly focusing on some other things.

Good links to keep an eye on for all the hot stove league news...

My buddy Corey Brock will be on hand for the meetings in Indy, and will be reporting as he always does for MLB.com, bringing in the latest on the Padres moves, or non moves.  Find his stories on the team's official web site.

The guys over at MLBTraderumors.com do a great job in re-posting some of the latest rumors from around the country, and the site is certainly worth bookmarking and checking back on often.

On occasion I also check out Pro Sports Daily, they also reprint stories from reporters and columnists from around the country...worth a look...

I'll also reprint or at least link to some good stuff when the meetings get started as well.

Read that the legendary PA voice of the New York Yankees, Bob Sheppard, is calling it a career.  He's 99 years old, and has been in poor health for the last couple of years.  He is still heard at Yankee Stadium, because Derek Jeter insists that they play the recorded intro from Sheppard before he bats every time.  That's respect.  Sheppard announced his first game in 1951, and in the lineup that day, batting 8th and playing second base, number 42, Jerry Coleman.  It was a game between the Red Sox and Yankees.  Mickey Mantle was also playing in his first game for the Bronx Bombers.  Pretty cool.

The guys at at Gaslampball.com pointed out on my Twitter account (@PadsCast) that the new picture I chose for the blog, was a little gray and ominous and after further review they were correct.  Thanks guys for pointing that out.  There is a new photo up and hopefully this one represents America's Finest City a little better.  By the way, the photos that grace the heading of the blog and most of the other ones you see, are taken by me.  I love photography and try to do the best job I can.  I think I over-photoshopped the first one, and posted a new one!

Alright, that's it for now.  Hope you'll tune in tonight for the Toreros and the Cougars at 8:30!