Time to Celebrate the many lives of Jerry Coleman...

Colonel Coleman was buried Monday with full military honors.  It was, if a funeral can be incredible,  an incredibly dignified and moving service.  The Marines did their retired Lieutenant Colonel proud. A 21 gun salute, the playing of Taps, and an F-18 flyover, with missing man formation.  There was not a dry eye among the close to 200 gathered friends, family and loved ones.  Again, just proving what we already knew, our friend Jerry Coleman was larger than life.  Larger than he ever portrayed himself or gave himself credit for.

I want to encourage you, the fans of the San Diego Padres, to come out to Petco Park Saturday.  Show the Colonel how much he meant to you as we celebrate his life in a free public memorial.  The gates will open at 9:30am, and please use the East Village or Park Blvd gates.  There will be free parking in the lots adjacent to the ballpark.  The ceremonies will begin at 10:30am, and I imagine will last a while.  I hope that there is not an empty seat in the place.  I hope that those of you that were unable to come down the park and pay respects, will do so on Saturday.  If you can, please attend.  Many dignitaries will be there, and some surprises along the way.  Expect an emotional roller coaster.  As I mentioned before, the Colonel would be upset if he were here, the way we are memorializing him, and remembering him.  But as I asked him last spring on a car ride from Tempe, to Peoria, "Jerry do you realize, WHO YOU ARE?  Do you realize the impact you have had on so many people?  Are you aware that you're a HERO?"  He looked at me as if he wanted to punch me, but instead, in typical Jerry style, chuckled, and said, come on just keep your eyes on the road.  He then softly said, thank you, and we never broached the subject again.  Such an amazing human being.  They broke the mold when they made this man.

I would also like to add, that for those who would like to make a donation in Jerry’s memory, the Coleman family suggests the Semper Fi Fund (www.semperfifund.org). The Semper Fi Fund, a 501(c)(3) nonprofit, was created by a group of Marine Corps spouses nine years ago to provide immediate financial assistance and lifetime support for injured and critically ill members of the U.S. Armed Forces and their families.

Hope to see you Saturday. 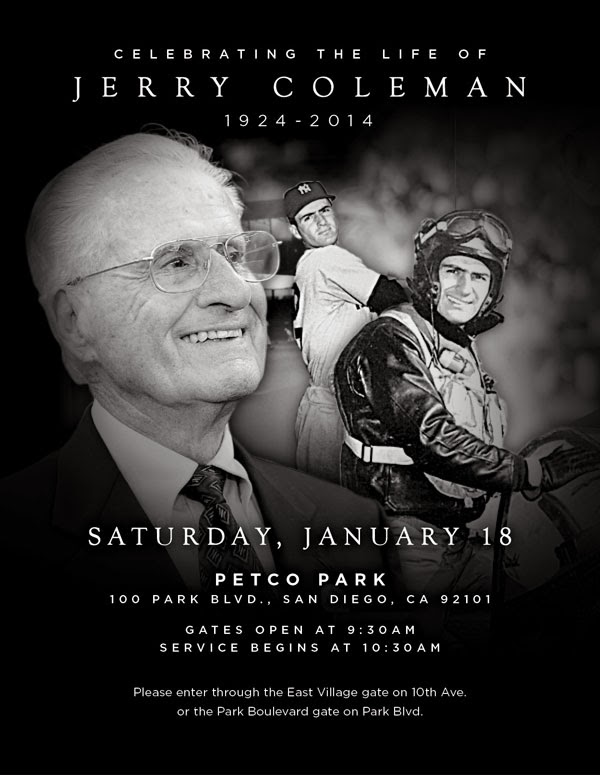